Embassy of the Republic of Lithuania, University College London, The Institute for Polish-Jewish Studies 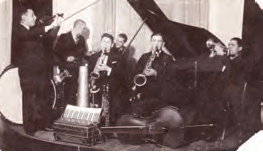 Music and song have been constants in Jewish life, from the chanting of Jewish prayer to the instrumental music of Jewish weddings and celebrations, and the Litvak contribution to the musical world includes Jascha Heifetz, George Gershwin, Benny Goodman, Leonard Cohen, and even the rock singer “Pink”.
Lithuanian Jewish music was recognized as a musical style by the mid-18th century, and its influence has become increasingly significant. Litvaks have contributed to the world of music in every field: from their inspiration to founding of the (Lithuanian) national composers’ school; to the documentation in song and music of Nazi persecution, and
its inspiration to partisan bravery and defiance during the Holocaust; to the Litvak contribution to classical music in the 20th century, and now, to the Litvak musical resurgence within contemporary Lithuanian music, following the collapse of the Soviet Union.
This year’s Litvak Days will honour the Litvak contribution to every
genre in the field of music, to better understand and evoke the past,
and enjoy its contemporary incarnations.

Thursday, 29 November 10am – 5pm
Conference: Music: soundtracks of Jewish life and the wider world.
Tickets (free) and Programme: https://www.eventbrite.co.uk/e/8thlitvak-days-in-london-day-2-conference-music-soundtracks-of-jewishlife-and-the-wider-world-tickets-51023450514
A light lunch will be provided.