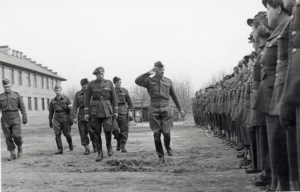 Courtesy of The Polish Institute and Sikorski Museum, London

An illustrated talk by Mike Levy, writer, journalist and researcher

followed by a Q&A with Prof Antony Polonsky

Two months after the German invasion of the Soviet Union in June 1941, General Władysław Anders (1892-1970) was permitted to recruit a Polish Army from among Polish citizens interned in Soviet central Asian and Siberian gulags, after an amnesty negotiated by the British government. Around five thousand of the recruits were Polish Jews. Joining the army meant rescue from hunger and disease, and because the army went to Palestine to join the allied war effort in the Middle East, trekking several thousand miles, Anders became known as the ‘Polish Moses.’

The British expected large-scale desertion by Jewish soldiers once the Anders Army reached Palestine, but against the wishes of the British, Anders refused to pursue those who did desert, many of whom joined Jewish paramilitary forces. He purportedly told his officers that ‘The Jews are fighting for their freedom and I do not intend to stand in their way.’ This event recalls a unique chapter in Polish-Jewish relations.

Mike Levy, writer, journalist and researcher will offer his assessment of Anders’ motives.