Every year, The Institute organizes a One-Day Conference that is usually held at the Polish Embassy in London at 47 Portland Place. Each year the Conference marks the launch of another volume of POLIN. Studies in Polish Jewry. So far twenty nine volumes of POLIN were published. 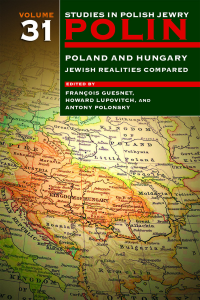 At the beginning of the twentieth century, the Jewish communities of Poland and Hungary were the largest in the world and arguably the most culturally vibrant, yet they have rarely been studied comparatively. Despite the obvious similarities, historians have mainly preferred to highlight the differences and emphasize instead the central European character of Hungarian Jewry. Speakers at this conference will reflect on the usefulness of historical comparisons thinking about the different social and cultural trajectory of Hungarian and Polish Jews, the Holocaust, historical consciousness, and the role of Jews in the respective entertainment industries. Author Barry Cohen joins us at the conclusion of the conference, with his reflections on conversations with Poles who discovered their Jewish origins late in life.
‘Polin Vol. 31’ is published by the Littman Library of Jewish Civilization/Liverpool University Press.
Volume Editors: François Guesnet, Howard Lupovitch and Antony Polonsky.
It will be available to purchase at the conference at a 25% discount.

This event is open to all. Registration is required, online only.

The Institute of Jewish Studies