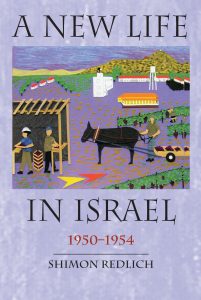 Shimon Redlich, the noted historian of Russian and Soviet Jewish history, has reflected on his survival during the Holocaust in Together and Apart in Brzezany (2002) and about the immediate postwar period which he spent in Lodz in Life in Transit, 1945-1950 (2010). His latest publication, A New Life in Israel, 1950-54, is an account of his arrival in Israel and his adaptation to and integration into Israeli society. The story revolves around three locations and contexts: Kibbutz Merhavia, the town of Afula, and the Israeli army. As in the earlier volumes, Redlich combines personal recollections with interviews and historical records.

We are delighted that Shimon Redlich has agreed to come to London to present his new book, and reflect on the successes and failures of becoming Israeli. The event will be introduced with a short video about revisiting Kibbutz Merhavia, a presentation by the author, and followed by a Q&A with the audience.